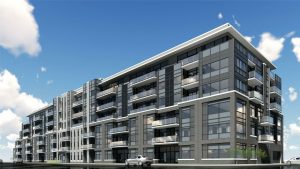 At its meeting of September 28, 2020, Burlington City Council considered Confidential Legal Report L-11- 20. Following this meeting, the City notified the Local Planning Appeal Tribunal that based on the revised plan submitted by LIV Communities/1085 Clearview Limited Partnership, only two issues remained in dispute between the City and the appellant. (Update on City’s webpage / 1085 Clearview Ave. webpage)

Does the proposal provide for an appropriate number of resident and visitor parking spaces?

In the event that the Tribunal allows the appeals, what is the appropriate form and content of the Official Plan amendment and Zoning By-law amendment instruments?

Burlington City Council has also directed that the planning analysis attached as Appendix ‘B’ to L-11-20 be released publicly and posted on the City’s webpage under Planning and Development Applications for Ward 1, while retaining solicitor/client privilege over the balance of this matter in its entirety.

A copy of the planning analysis and revised development concept are located on the development application webpage. (LINK HERE: https://www.burlington.ca/en/services-for-you/1085-clearview-ave.asp)

The LPAT Appeal Update on the application is on the city webpage here: https://www.burlington.ca/en/services-for-you/resources/Planning_and_Development/Current_Development_Projects/Ward_1/1085-Clearview/1085-Clearview-LPAT-Update.pdf.

The Planning Analysis is here: https://www.burlington.ca/en/services-for-you/resources/Planning_and_Development/Current_Development_Projects/Ward_1/1085-Clearview/L-11-20-Appendix-B.pdf.

On Oct. 9, 2020, the LPAT issued an Order confirming the scheduling of the hearing of the appeal to commence on November 30,2020.

I know that residents were advocating for a scaled back project here more in keeping with the low-density neighbourhood. This file was well down the planning path before it came to council leaving minimal opportunities for significant change. However the project is better than what was previously proposed (and turned down) by staff and council, and that is thanks to resident input.

Even with the revised project, however, staff and council share the concerns of the community around lack of sufficient parking. This could be addressed with either more parking, or with fewer units. Residents have been clear they would prefer fewer units in a smaller building.

Ultimately, the LPAT will decide.

Residents have also raised concerns around matters that are more related to site planning, including fencing, trees and pedestrian access. Those matters have not been determined yet, and are not part of the LPAT hearing.  I will be bringing a motion to “undelegate” the site plan from staff back to council, to give the community and council further input before those matters are settled.

I have also initiated a process to change the address from Clearview to Masonry Court. It makes practical sense and will avoid confusion in deliveries and emergency access, given there is no vehicular access from Clearview. And it will help separate this building from the balance of the low density Clearview/ Queen Mary/St. Matthews neighbourhood.

At a separate meeting, I also brought a motion to exclude Clearview/Queen Mary/St. Matthews from the Aldershot GO Station Major Transit Station Area Boundaries. Significant growth is expected within MTSAs around our GO stations, so excluding this neighbourhood will help relieve pressure for overdevelopment. City council unanimously approved this recommendation, which will ultimately be decided by Halton Region during their Municipal Comprehensive Review which  is currently underway.

We undertook a brand new process with this application that hasn’t been tried before. Typically, residents would not see the details of a revised proposal before seeing them at a public LPAT hearing. I worked with the applicant who voluntarily agreed to share these proposed revisions publicly with the community at a city committee meeting. This also gave the Ward Councillor information about the project he would not otherwise have had, as he declared a Conflict of Interest due to living behind the proposal and did not receive reports or participate in committee discussions on this matter.

The public release of the information gave residents the opportunity to share your views about the project, and get an advance look at what will be discussed at the hearing.

Details of the revised proposal, presented at the Aug. 11 Community Planning Regulation and Mobility COmmittee meeting are here: https://www.burlington.ca/en/services-for-you/resources/Planning_and_Development/Current_Development_Projects/Ward_1/1085-Clearview/AUGUST-2020—Revised-With-Prejudice-Proposal-CPRM.pdf.

The minutes of that meeting also include a summary of all the public feedback received: https://burlingtonpublishing.escribemeetings.com/Meeting.aspx?Id=5166f46d-7404-4a83-b1ff-764dae0b3f69&Agenda=PostMinutes&lang=English.

The City will be sharing all the feedback we received from residents during and after this meeting with the LPAT for them to consider in their decision making. Residents can also attend the hearing, and one member of the community has participant status to speak during the proceedings on behalf of the neighbourhood.

Nothwithstanding the above application, we have come long way together in protecting the area from overdevelopment, since I first launched my election campaign for mayor on Clearview in April 2018. 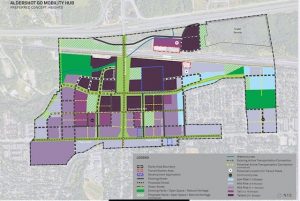 Several months earlier, in December 2017, staff released their “preferred concept” for the the proposed Aldershot GO Mobility Hub (as it was called then). The concept envisioned 20+ storey buildings at the NorthWest corner of Clearview (dark purple), 7-11 storeys on the balance of Clearview and Queen Mary (lilac), and 12-19 storeys on the 1085 Clearview site of the current proposed 6 storey building (maroon). See map to the right. 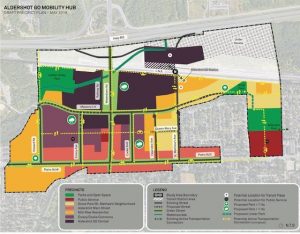 After our campaign launched, and with considerable input from the community, those plans were later modified. In the revised May 2018 plan, Queen Mary and St. Matthews were changed to singles, semis and townhouses (yellow on the map to the left), but Clearview was still slated for 11 storey buildings, including the 1085 Clearview site (orange on the map to the left). This clearly still represented overdevelopment.

You can read more about the background of the Aldershot Go Mobility Hub here: https://www.burlington.ca/en/services-for-you/aldershot-go-mobility-hub-study.asp. 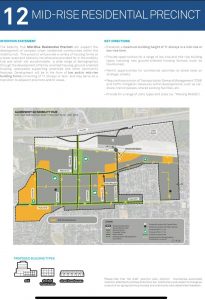 The 1085 Clearview proposal at 6 stories is half the proposed city draft plan from 2018.

So the bottom line is this:

The Clearview/Queen Mary/St. Matthews neighbourhood has gone from being obliterated by up to 20+ storey buildings, to singles, semis and townhouses on Queen Mary/St.Matthews, with one proposed 6 storey building at the top of Clearview (not the potential 11 storeys envisioned in the revised city plan) and even that building will be carved out and given a new address; and finally a proposal currently with Halton Region to remove the entire neighbourhood from the MTSA boundaries to relieve future pressure for overdevelopment here.

We have made progress, together. 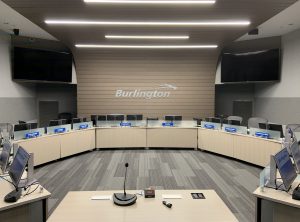 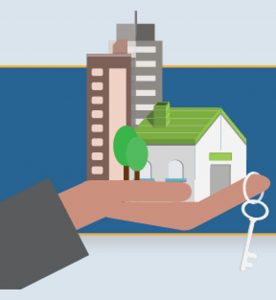